Join us for a live online tour of the 1200-year-old Fuhachinmangu Shrine, located in the central Japan city of Iwata, Shizuoka Prefecture. Despite its urban location the shrine is surrounded by sacred forest, a realm of nature and the gods, sealed off from the rest of the world since ancient times. Its famous two-storey tower gate and worship hall are powerfully evocative reminders of spiritual heritage, even viewed online. During this virtual event you’ll be able to visit the shrine and learn how to pay your respects to the kami gods worshipped there. There will also be an introduction to the Great Festival held at the shrine each autumn with video footage of previous events. Don’t miss your change to experience the solemn majesty of the Fuhachinmangu Shrine.

History of the Fuhachimangu Shrine

The Fuhachimangu Shrine is located in the central Japan city of Iwata, Shizuoka Prefecture. It is said to have been founded during the Tempyo Era (729 to 749) by Ohira no Sakurai, who was the governor of Totomi Province and reputedly the great-grandson of Emperor Temmu. The governor established the shrine to pray for peace and protection for Totomi province. According to Shinto belief, a “Hachiman” shrine is dedicated to the deified spirit of Emperor Ojin (270–310). The shrine was named “Fu”-hachiman because it was the Hachiman Shrine of the province (“fu” in Japanese) of Totomi.

The Great Festival of the Fuhachimangu Shrine, known in Japanese as the “Reitasai”, takes place annually on the first weekend of October. Special events also take place on the Friday evening before the main festival. During the hamagori ceremony that happens a week beforehand participants enter the sea to purify their bodies and pray for a safe and enjoyable festival. They then take kiyome-suna (purified sand) back to their neighbourhoods to scatter on the Sunday when portable shrines are brought out for the festival.
A special stage is built by the two-storey tower gate for the weekend of the festival, where a urayasu-no-mai (shrine maiden dance) is performed. Parishioners of the shrine also perform traditional dances known as tekomai and teodori. The festival then gets into full flow as parishioners from 20 neighbourhoods energetically pull their floats through the streets. Traditionally, the festival features two-wheel floats called nakaizumi, but recently there are more four-wheeled floats. The variety of float types is an unusual feature of the festival.
The floats are pulled around the streets to the lively accompaniment of enshuyosuai-sanjasaireibayashi musicians, a style that originated in the Kasai area of Edo (present day Tokyo). There are three drummers (called shoden, kamakura and yonchome) and three walking musicians (ooma, yataishita and bakabayashi). Four types of instruments are played: one large taiko drum, two small taiko drums, two flutes, and a type of bell. Dances called okame, hyottoko and hanya no mai are performed to the musical accompaniment while the floats are drawn through the streets to the gentle rhythmic “shitta…shitta” cries of the musicians. The whole festival is filled with energy. 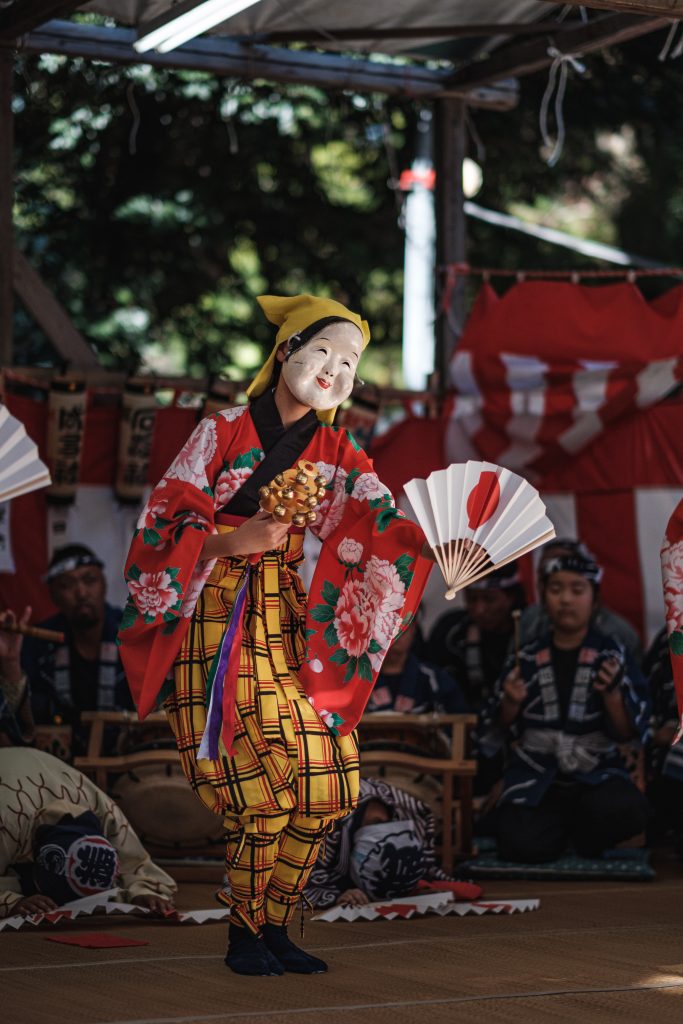